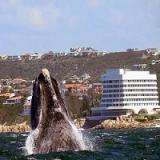 Plettenberg bay, Where the giants of the sea come out to play....


Plettenberg Bay is well known as being one of the best destinations worldwide for whale watching. There is no other town in South Africa that has the variety of sightings of different species throughout the year.  Whales have been a focal point in the area for many years. The old whaling station was built on the site of the Beacon Island Hotel in the early 1900’s and parts of the iron slipway are still visible today.

The different types of whales seen frequenting the bay:

Bryde’s Whale - Bryde’s whales are named after Johan Bryde, a Norwegian who built the first whaling stations in South Africa.  They can be seen in the area throughout the year and are most commonly spotted during the summer months.

Humpback Whale - Humpback whales are migratory mammals which are often seen along the coast as they travel from the Antarctic to their breeding and feeding grounds in areas surrounding Mozambique and Angola.  They are most commonly seen here in July and again between September and December.

Southern Right Whale -Southern Right whales migrate from their feeding grounds in the icy Antarctic waters to warmer climates to give birth, raise calves and breed.  They typically arrive in the sheltered bays of the Western Cape from June and can be seen right through until around November.  Southern Right whales are by far the greatest entertainers in our waters offering spectacular water acrobatic shows.

Sei Whale - Sei Whales are occasionally encountered on boat trips.  They look very similar to a Brydes Whale but are much larger.

There are many ways to view the whales that visit the waters in and around Plettenberg Bay.  You may be fortunate to see some activity whilst walking on the beach or from vantage points such as the Lookout Viewpoint and the Robberg Peninsula.  You can also join one of the organised boat trips which schedule many trips each day, particularly during whale season.